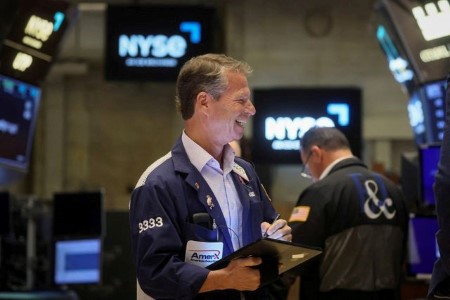 NEW YORK, Aug 19 (Reuters) - U.S. stocks were sharply lower on Friday thanks to a fall in megacap stocks and rising U.S. bond yields, putting the S&P 500 and Nasdaq on track to snap a four-week winning streak.

The benchmark 10-year U.S. Treasury yield climbed to an almost one-month high near 3%. Amazon.com AMZN.O , Apple AAPL.O and Microsoft MSFT.O put the most pressure on the S&P 500.

Investors have been weighing how aggressive the Federal Reserve may need to be as it raises interest rates to battle inflation.

Richmond Federal Reserve President Thomas Barkin said on Friday that U.S. central bank officials have "a lot of time still" before they need to decide how large an interest rate increase to approve at their Sept. 20-21 policy meeting.

"The rise in rates around the globe and tough talk from central bankers are being used as an excuse to push stocks lower in very light volume on an August Friday session," said Peter Cardillo, chief market economist at Spartan Capital Securities in New York.

The Fed has raised its benchmark overnight interest rate by 225 basis points since March to fight four decade-high inflation.

Focus next week may be on Fed Chair Jerome Powell's speech on the economic outlook at the annual global central bankers' conference in Jackson Hole, Wyoming.

Shares of Deere & Co DE.N were near flat after it lowered its full-year profit outlook and said it has sold out of large tractors as it grapples with parts shortages and high costs.

Declining issues outnumbered advancing ones on the NYSE by a 6.65-to-1 ratio; on Nasdaq, a 3.80-to-1 ratio favored decliners.