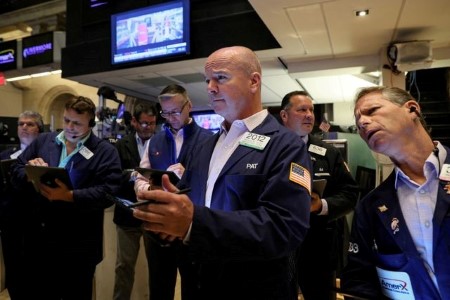 * Banks on track for sixth session of losses

Aug 24 (Reuters) - Wall Street's main indexes were subdued in early trading on Wednesday as recent economic data added to worries of a slowdown ahead of the U.S. Federal Reserve's conference at Jackson Hole this week.

The U.S. indexes posted losses in the past three sessions after a summer rally was halted by growing concerns of a hawkish stance by the Fed, an energy crisis in Europe and signs of economic slowdown in China.

Data on Tuesday showed private-sector business activity in the United States contracted for a second straight month in August to its weakest in 27 months, with particular softness in the services sector as demand weakened.

"Traders are reluctant to raise their exposure, afraid of getting run over by a more forceful Fed," Marios Hadjikyriacos, senior investment analyst at XM, said.

Investor focus will be on the Jackson Hole symposium which begins on Thursday and remarks from Fed Chair Jerome Powell the day after for clues on whether the central bank can achieve a "soft landing".

"Some anticipation over how hawkish Powell could be on Friday has added to some of the lingering concerns that we've seen recently," said Ryan Detrick, chief market strategist at Carson Group.

Markets had bounced back from bear market lows on better-than-expected results from corporate America and data suggesting that inflation may have peaked, but fears of an aggressive Fed snapped the summer rally last week.

The S&P 500 .SPX has recovered 13% from its mid-June lows. The benchmark index will end the year a little above its current level, according to a Reuters poll.

Meanwhile, surveys on Tuesday showed the global economy is increasingly at risk of sliding into recession as consumers faced with generation-high inflation rein in spending, while central banks are tightening policy aggressively.

Banks .SPXBK slipped 0.4%, on track to extend losses for the sixth straight session.

Nordstrom Inc JWN.N tumbled 17.6% after the retailer cut its annual revenue and profit forecasts, a sign that inflation was squeezing consumer spending on its high-end clothing and footwear.