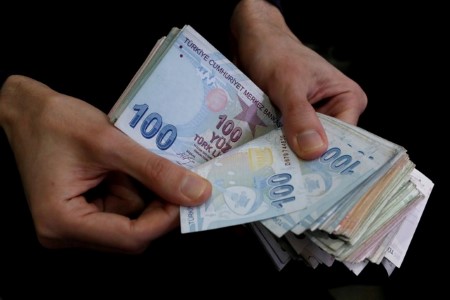 * Egyptian bonds give back some gains

Aug 19 (Reuters) - Emerging market stocks were on course to snap a four-week winning streak on Friday, while developing world currencies looked set for their worst week in nearly four months as recession worries bolstered the dollar.

The Chinese yuan CNY= slipped 0.4% and was on track for its worst weekly performance since April-end as weak data from the country forced an interest rate cut from the central bank this week.

That dulled sentiment in Asia, while monetary policy moves from central banks of Turkey and Egypt fanned inflation fears.

Citigroup strategists said they were bearish on EM currencies across regions.

"Sliding commodities, especially base metals and lately oil prices, are reflective of downside demand risks and the situation in China is not helping," Citigroup strategists added.

The Turkish lira TRY= fell again on Friday, down 0.4%, leaving it less than 2% away from record lows of December, after the central bank cut the key lending rate to 13% despite inflation at 80%. The currency has weakened 26% this year.

In Egypt, the central bank kept the deposit rate unchanged at 11.25%, hours after Hassan Abdalla was appointed as the caretaker of the central bank following former governor Tarek Amer's abrupt resignation on Wednesday.

Analysts had expected the deposit rate to be increased by 50 bps.

Egyptian dollar bonds XS0505478684=TE which had slumped after Amer's resignation recouped some losses on Thursday, only to turn lower again on Friday.

Stocks slid too, with Hong Kong shares .HSI losing 2% this week. The broader EM stock index's .MSCIEF 0.4% decline on Friday set it on course to end the week down more than 1%.

While EM bond fund inflows for the latest week were the largest since early April, year-to-date flows were likely to be the lowest since at least 2005, JPMorgan data showed.

Hungary's forint EURHUF= was among the big decliners this week as energy supply worries owing to the Russia-Ukraine war have dampened economic view and prompted an outlook credit revision to "negative" from S&P.

For TOP NEWS across emerging markets