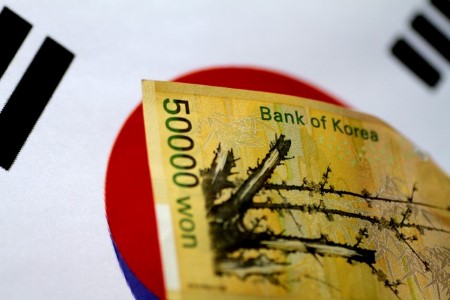 Aug 22 (Reuters) - China's yuan CNY=CFXS eased 0.1% to its weakest in almost two years after the central bank cut its benchmark lending rate and mortgage reference rate on Monday, while Indonesia's rupiah fell on expectations that rates there would stay at record lows.

The general weakness in Asian currencies was cast against broad strength in the greenback as the dollar index =USD struck a two week high after another Federal Reserve official flagged the likelihood of continued aggressive monetary tightening ahead of the central bank's key Jackson Hole symposium this week.

Comments on Friday by Richmond Fed President Thomas Barkin about the "urge" among central bankers being towards faster, front-loaded rate increases heightened worries over global growth.

While most central banks have been tightening monetary policy to counter inflationary pressures, the People's Bank of China (PBOC) bucked the trend by lowering interest rates to bolster an economy hit by COVID-19 and an ailing property sector.

Maybank analysts expect the PBOC to remain in easing mode as long as the economy is under pressure.

But Goldman Sachs analysts reckoned the Chinese central bank would be cautious.

"Due to rising food prices and potential spillover effects from developed markets' monetary policy tightening, the PBOC might not be in a rush to deliver more interest rate cuts in our view," they said in a note.

Bank Indonesia (BI), one of the few central banks in the region that has yet to begin tightening monetary policy, is expected to leave its benchmark rate unchanged at a record low when it meets on Tuesday, according to a Reuters poll.

The Philippine peso PHP= weakened 0.2% and hit its lowest in nearly a month, while Malaysia's ringgit MYR= and Thailand's baht THB=TH depreciated 0.1% and 0.5%, respectively.

While stocks in China gained 0.6% on rate cut there, other share markets in the region slipped. Indonesia's .JKSE main index declined 1.1% and Philippines .PSI fell 1.6%.

The following table shows rates for Asian currencies against the dollar at 0442 GMT. COUNTRY

Reporting by Upasana Singh in Bengaluru; Editing by Simon Cameron-Moore