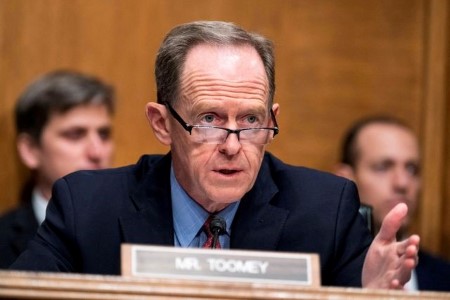 WASHINGTON, Sept 22 (Reuters) - The heads of the nation's largest banks faced pointed criticism on Thursday from Republicans complaining the firms are inappropriately taking liberal stances on social and cultural issues.

Senator Pat Toomey, the senior Republican on the Senate Banking Committee, urged banks to stop "embracing a liberal ESG agenda that harms America," as chief executives appeared before Congress for an oversight hearing. Toomey, frequently a bank ally who has opposed stricter industry rules, argued firms are out of bounds when they weigh in on non-banking issues like guns and abortion.

"I can't help but observe that when banks do weigh-in on highly charged social and political issues, they seem to always come down on the liberal side," he said in his opening statement.

The increased scrutiny underscores the challenges the country's largest lenders increasingly face as they try to balance commercial interests with pressure from policymakers, activists and investors to take stances on environmental, social and governance (ESG) issues.

Multiple Republicans argued banks are caving to liberal pressure to weigh in on such issues, and suggested conservatives will be quick to counterbalance with their own pushback. Sen. Kevin Cramer said banks were feeling pressure to be "one of the cool crowd."

Cramer, a North Dakota Republican, got the CEOs gathered to promise that a recently approved merchant code to record gun store transactions would not be used to limit firearms purchases.

"We do not intend to use the code to limit or restrict the purchase of firearms," said Citigroup C.N CEO Jane Fraser, who added, "We respect the second amendment." The line-up included CEOs of the four largest U.S. banks: JPMorgan Chase & Co's JPM.N Jamie Dimon, Wells Fargo's WFC.N Charles Scharf, Bank of America's BAC.N Brian Moynihan and Citi's Fraser. They were joined by the CEOs of the country's largest regional lenders, US Bancorp USB.N , PNC Financial PNC.N and Truist TFC.N .

For their part, Democrats continued their critical stance towards big banks, arguing they are enjoying large profits while mistreating consumers and workers. None of the CEOs in attendance affirmatively agreed with Chairman Sherrod Brown's request that they remain neutral in any employee unionization efforts.

Sen. Elizabeth Warren blasted banks for what she said were unacceptable levels of fraud on Zelle, the digital payments tool owned by several of the largest banks. She criticized firms for not providing complete data on the level of Zelle fraud seen at each bank, with several CEOs promising to provide the information by the end of the day. Warren sent a letter seeking such information in July.

"You tell people that it is safe, but when someone is defrauded, you claim that's the customer's problem," she said.

Brown said told reporters after the hearing Democrats "will stay on them" until full fraud figures are provided.

PNC CEO William Demchek said banks are committed to solving any problems with Zelle, but urged policymakers to scrutinize other peer-to-peer payment programs, which he said had far higher levels of fraud.

The CEOs said their banks cover any unauthorized transactions, but would not commit to repaying all fraud claims from customers.

CEOs were in Washington for a second day of oversight hearings. On Wednesday, executives were pressed by lawmakers to take a tougher stance on doing business with China amid growing tensions between Washington and Beijing over Taiwan's sovereignty and China's human rights record.
Reporting by Pete Schroeder, Lananh Nguyen and Saeed Azhar; additional reporting by Hannah Lang Editing by Nick Zieminski