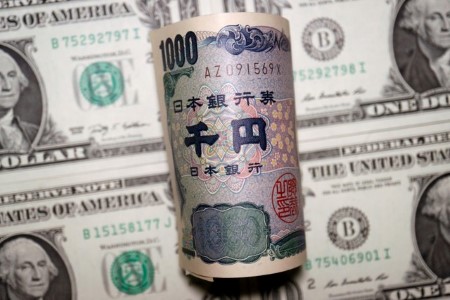 By Rae Wee and Vidya Ranganathan

SINGAPORE, Aug 12 (Reuters) - The Japanese yen fell the most against a recovering U.S. dollar on Friday, as a two-day rally in equities conceded to market expectations that the Fed would have to do a lot more to contain inflation.

That realisation followed speeches and statements from a bunch of Federal Reserve officials warning investors against being sanguine after this week's slight softening in inflation numbers.

The latest was San Francisco Fed President Mary Daly, who said on Thursday that a 50 basis point interest rate hike in September "makes sense", given recent economic data, including inflation figures, but that she is open to a bigger rate hike if data warrants.

The Nasdaq .IXIC and S&P 500 .SPX retreated on Thursday, despite fresh evidence of cooling inflation.

An exception was the kiwi NZD=D3 , which was supported by expectations of a big rate rise in New Zealand next week and rose half a percent versus the greenback to $0.6464.

"The market will come to a realization that the FOMC has a lot more work to do and they will have to increase the funds rate to as high as 4% at the end of this year," said Carol Kong, a Sydney-based senior associate for currency strategy and international economics at Commonwealth Bank of Australia.

"I do think there is some room for markets to revise higher again their expectation for the Fed funds rate, so that will help the U.S. dollar to push higher again and erase all the losses following the CPI and PPI figures that we got."

Thursday's data showed U.S. producer prices (PPI) unexpectedly fell in July amid a drop in the cost of energy products. That followed Wednesday's surprise news that consumer prices (CPI) were unchanged in July due to a drop in gasoline prices.

While that data caused a relief rally in markets fearing the Fed's super-charged tightening path, it was short-lived. Despite its recent bounce off mid-June lows, the tech-heavy Nasdaq is down about 18% so far this year.

The dollar index =USD is still up 10% this year, rising alongside the 225 basis points of Fed rate rises since March.

The euro has also been weighed down by Europe's woes with the war in Ukraine, the hunt for non-Russian energy sources, and a hit to the German economy from scant rainfall. In the latest troubles, low water levels on the Rhine, Germany's commercial artery, have disrupted shipping and pushed freight costs up more than five-fold.

US Treasury yields rose too, more at the longer end US10YT=RR

, causing the inverted yield curve to be less so.

"It suggests scepticism from the bond market and taking a 'one swallow doesn't make a spring' attitude," analysts at Commerzbank wrote. "Inflation may have peaked but they may remain sticky and still too high for the Fed's liking."