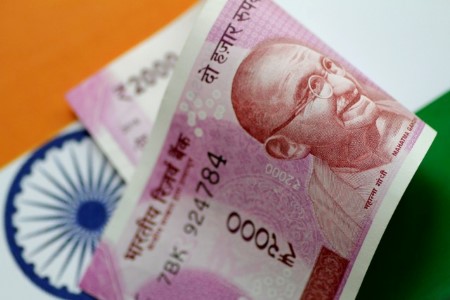 MUMBAI, Aug 23 (Reuters) - The Indian rupee was trading little changed to the dollar on Tuesday, hovering just under the psychological 80 level, amid rising concerns about the deteriorating global risk mood.

The rupee in recent sessions has struggled in the backdrop of a resurgent dollar and risk aversion, and analysts reckon that the local currency could come under more pressure.

"The rupee is very vulnerable now as a potential wave of risk aversion can be triggered if the next (U.S.) inflation print is worse than expected," said Srinivas Puni, managing director at forex advisory firm QuantArt Market Solutions.

"Persistent fall in equities is the factor to watch out for."

The U.S. benchmark index tumbled more than 2% on Monday.

Fed fund futures are assigning a more than 50% probability that the U.S. central bank will hike rates by 75 basis points for the third straight time in September to quell inflation.

The dollar index =USD briefly climbed above 109 on Monday, supported by the equity selloff and hawkish Fed expectations. The index since the beginning of last week is up more than 3%.

The BSE Sensex .BSESN on Tuesday fell to its lowest level in over two weeks. The gauge slipped 1.4% in the previous session. According to preliminary BSE data, foreign investors were net sellers of 4.5 billion rupees ($56.34 million) of Indian shares on Monday. ($1 = 79.8660 Indian rupees)
Reporting by Nimesh Vora Editing by Dhanya Ann Thoppil