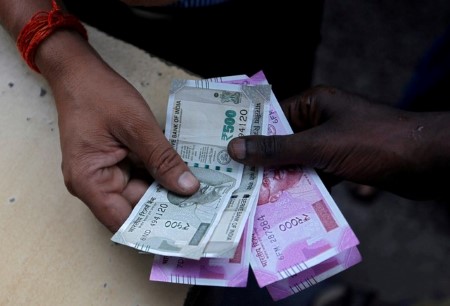 MUMBAI, Aug 22 (Reuters) - The Indian rupee's fair value is around 80 against the U.S. dollar, given the country's balance of payment challenges and the Reserve Bank of India's interventions, JPMorgan's head of emerging Asia local markets strategy said.

India's balance of payments, a measure of how much the country relies on money from abroad, has been squeezed by a record trade deficit that has prompted economists to revisit their current account deficit and balance of payments (BoP)projections.

"India's CAD (current account deficit) is tracking 4% of the GDP, historically a wide number. If left unchecked, this should reflect on the price of the rupee. But things are not left unchecked, and RBI has been managing the rupee," Arindam Sandilya told Reuters in an interview.

"Taking a holistic view on India's forex-relevant BoP position and the RBI, we reckon the fair value of the rupee is around 80."

India's foreign exchange reserves have declined to $570.7 billion from a record high of about $642 billion in September 2021 as the RBI has stepped in to bolster the rupee. Still, the local currency is down 7.5% in 2022, and on track for its worst annual performance in four years.

A rebound in inflows into Indian stocks in the past few days, with foreign investors turning buyers for the first time in nine months, has helped the rupee to an extent.

Sandilya reckons that JPMorgan's fair value was near 81-82 at the beginning of the current quarter, but the surprising turnaround in equity flows has led it to reassess its fair value to near 80.

Shandilya pointed out that the market's pricing of the U.S. Federal Reserve's slightly dovish path next year is contrary to what policymakers have been saying recently.

On how much the oil's recent pullback will help rupee, Sandilya pointed that when there is a demand-side fuelled drop in oil prices, emerging market currencies, including that of oil importing nations, weaken.
Reporting by Nimesh Vora; Editing by Neha Arora and Saumyadeb Chakrabarty