Gold slips to lowest in more than 3 weeks on firmer dollar, Fed worries 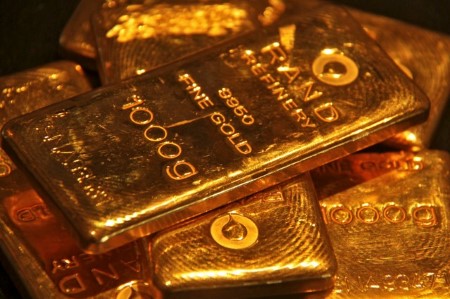 Aug 22 (Reuters) - Gold prices fell to their lowest in more than three weeks on Monday, weighed down by a stronger dollar and expectations of more rate hikes from the U.S. Federal Reserve to tame surging inflation.

"The upward resumption in the U.S. dollar will of course be weighing on the gold market, but it seems to be more aligned with the simultaneous sell-off seen across bonds, stocks and currencies," said Clifford Bennett, chief economist at ACY Securities.

"Wherever there had been a period of false hopes such as the Federal Reserve slowing, those expectations appear to be immediately evaporating."

The dollar USD= rose to a more one-month high against its rivals, making gold more expensive for buyers holding other currencies.

Benchmark 10-year Treasury yields US10YT=RR rose to their highest in a month, increasing the opportunity cost of holding non-yielding gold.

The Fed will raise rates by 50 basis points in September amid expectations inflation has peaked and growing recession worries, according to economists in a Reuters poll.

Traders are now pricing in around a 46.5% chance of a 75-basis-point rate hike in September and a 53.5% chance of a 50-bp increase after recent hawkish remarks from Fed officials. FEDWATCH

Focus this week will be on comments by Fed Chair Jerome Powell when he addresses the annual global central banking conference in Jackson Hole, Wyoming, on Friday.

Gold is highly sensitive to rising U.S. interest rates, as these increase the opportunity cost of holding non-yielding bullion.