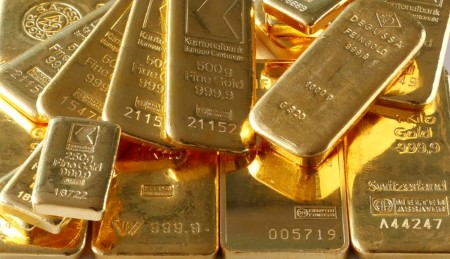 Aug 24 (Reuters) - Gold prices were flat on Wednesday, as the U.S. dollar strengthened after hawkish comments from a Federal Reserve official kept investors cautious ahead of Jackson Hole symposium due later this week.

The dollar USD= firmed near recent peak against its rivals, making gold more expensive for buyers holding other currencies.

"We're seeing the market digest the correction after six days of losses with speech from Powell on Friday being an important thing to markets at this point, expecting some kind of a guidance, or framework about the Fed policy," said Ilya Spivak, a currency strategist at DailyFX.

"Overall, macro environment is materially not very much different. At this stage, the bias remains very much bearish for gold."

Minneapolis Federal Reserve Bank President Neel Kashkari was the latest official to reiterate the U.S. Fed's focus on controlling inflation ahead of all else.

The U.S. central bank has raised its benchmark overnight interest rate by 225 basis points in total since March to contain inflationary pressures and has noted that further tightening would depend on economic data points.

Sales of new U.S. single-family homes plunged to a 6-1/2-year low in July, while a survey from S&P Global showed its measure of private sector business activity fell to a 27-month low, suggesting Fed efforts to tame inflation were working.