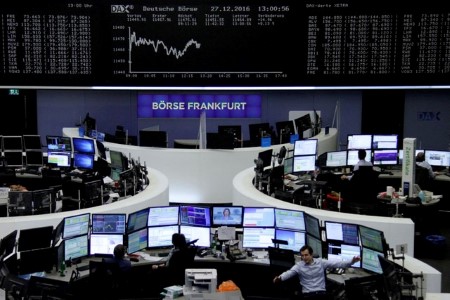 (For a Reuters live blog on U.S., UK and European stock markets, click LIVE/ or type LIVE/ in a news window)

By Anisha Sircar and Shreyashi Sanyal

Aug 23 (Reuters) - European shares slipped on Tuesday, extending their losing streak for a third session as investors fretted about soaring energy prices and a weak economic outlook after data showed business activity in the region contracted this month.

The pan-European STOXX 600 .STOXX slipped 0.4%, dropping to its lowest in almost a month.

In Germany, the downturn deepened in August, as companies saw demand weaken due to high inflation, rising interest rates and economic uncertainty.

Separately, the manufacturing index rose to 49.8 in August from 49.3 the previous month, beating analyst forecasts of 48.2. Germany's DAX .GDAXI dipped 0.3% after the data.

"It's been another day of poor economic data for European markets, with the latest flash manufacturing PMI numbers falling into contraction territory for Germany, France and the UK." said Michael Hewson, chief market analyst at CMC Markets.

Still, Hewson noted that even though economic data has been poor, the reaction of markets has been slightly more ambivalent.

Benchmark gas prices in the European Union surged 13% overnight to a record peak, having doubled in just a month to reach 14 times the average of the past decade. Russia will halt gas supplies to Europe via the Nord Stream 1 pipeline for three days at the end of the month.

Investors are concerned about the uncertainty ahead for European markets, as it is feared the energy crunch could worsen.

Market nervousness is also set to persist ahead of the Jackson Hole meeting of global central bankers on Friday, analysts say, as investors await U.S. Federal Reserve Chair Jerome Powell's hints on the path ahead for monetary policy in the world's largest economy.

Among stocks, German utility Uniper SE UN01.DE rose 4.0% after saying it would start producing electricity for the market at its Heyden 4 hard coal-fired power plant as a three-day halt in Russia's gas supplies to Europe may cause disruptions to power supply.
Reporting by Anisha Sircar in Bengaluru; Editing by Anil D'Silva, Krishna Chandra Eluri and Jan Harvey