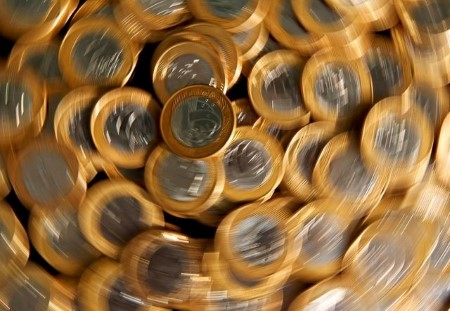 By Susan Mathew and Shreyashi Sanyal

Aug 22 (Reuters) - Emerging market currencies were muted on Monday as the dollar gained momentum, with Brazil's trading in a narrow range, while Israel's shekel fell despite an interest rate hike by the country's central bank.

Risk aversion amid inflation and recession fears rose on Monday following Russia's announcement of a three-day halt to European gas supplies via the Nord Stream 1 pipeline at the end of this month, as well as calls for faster monetary policy tightening by members of the Federal Reserve.

Brazil's real BRBY BRL= steadied after a fall earlier in the session, with markets keeping close watch for any updates on a heated presidential race between Luiz Inacio Lula da Silva and incumbent President Jair Bolsonaro.

"The Fed will remain hawkish, the USD will recover its safe haven status, and domestically (in Brazil) the traditional electoral cycle will weigh on local assets," said Mauricio Une senior strategist at Rabobank.

Investors will look to the U.S. central bank's stance after it hiked rates by 225 basis points since March. The dollar marched ahead, with a weakening euro aiding its gains.

Israel's shekel ILS= fell 0.7% to near two-week lows after the central bank hiked its key rate by 75 basis points to 2%, to rein in inflation that has topped 5%.

"We think the (central bank) sees the need for testing rates in or above this range in the coming months, based on the current outlook," strategists at Citigroup said.

"However, this more aggressive path also raises the prospect of a more sudden stop or even reversal in the policy rate path, should the data warrant it."

Colombia lowered its economic growth projection for next year to 2.2%, down from a previous 3.2%, Finance Minister Jose Antonio Ocampo said on Friday, adding that he does not think the country will regain its investment grade soon.

Argentina's government on Sunday appointed a well-known economist and vocal critic of the policies of Cristina Fernandez de Kirchner, the current vice president and former president, to effectively be the second in command of the key economy ministry.

Reporting by Susan Mathew and Shreyashi Sanyal in Bengaluru; Editing by Paul Simao and Cynthia Osterman