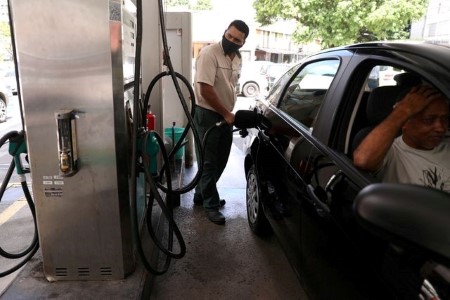 Brazil's IPCA-15 consumer price index fell 0.73% in the period, compared to a 0.13% rise in the previous month, keeping the downtrend already seen earlier this month in data for the full month of July.

It was the lowest rate recorded since mid-month inflation measurements began in November 1991, even though economists polled by Reuters had expected an even deeper drop of 0.81%.

Brazil reported the monthly deflation as transportation prices continue to fall on the back of federal legislation cutting taxes levied on fuel and fresh price cuts by state-run oil company Petrobras PETR4.SA .

According to IBGE, transportation costs fell 5.24% in the period on lower gasoline and ethanol prices, but were partially offset by a 1.12% rise in food and beverage costs due to soaring milk prices.

Inflation hit 9.6% in the 12 months to mid-August, while market expectations stood at 9.5%, still far above the central bank's target of 3.5%, plus or minus 1.5 percentage point.

Central bank chief Roberto Campos Neto on Tuesday said inflation would reach 6.5% or "a little lower" this year, but noted there would be "a payback" in 2023 as some of the government measures will expire in December.

Brazil's central bank has hiked its key interest rate to 13.75% from a record low of 2% in March 2021, but recently showed signs that the aggressive tightening would stop in September.