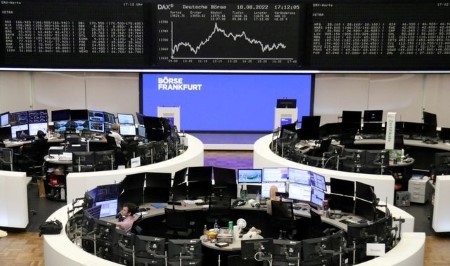 Asian stocks had struggled to find direction, with concerns about China's sputtering growth weighing on sentiment. Earlier this week, China unexpectedly cut key lending rates in an attempt to revive demand after data showed the economy unexpectedly slowed in July amid a zero-COVID policy and property crisis.

European stocks opened in the red and sentiment was further hit by data showing German producer prices - a leading indicator for inflation - saw their highest ever increases in July, as energy costs continued to surge. Energy prices were up 105% compared with July 2021, mainly due to higher prices for natural gas and electricity.

Germany's finance ministry said on Friday that the economic outlook for Europe's largest economy is gloomy.

Meanwhile, UK consumer sentiment hit its lowest since at least 1974 in August, with households feeling "a sense of exasperation" about the rising cost of living.

British retail sales data for July came in higher than expected, driven by a surge in online spending, but volumes are expected to resume their decline as costs rise.

The Bank of England has warned that high inflation is likely to tip Britain into a recession later this year.

"All three of the world’s major economic engines – the US, Europe and China – are spluttering," wrote Berenberg economists in a note to clients.

"While China struggles with its unsustainable zero-COVID-19 policy and a host of internal financial imbalances, an inflation tsunami is battering the US and Europe."

"Consumers across the Western world have seldom been more pessimistic."

German bond yields rose, with the 10-year yield reaching a one-month high of 1.202% DE10YT=RR , as the producer price data was seen as reinforcing fears of "stagflation" - a combination of high inflation and low growth.

"When market participants start to return from their holidays and look back at the past days and weeks, they will find central banks still far from having achieved their goals of reining in inflation," ING rates strategists said in a note to clients.

"That means a continued tussle between central bank tightening expectations and recession fears."

The threat of higher borrowing costs also hung over markets after four U.S. Federal Reserve officials signaled there was more work to do on interest rates.

Oil prices slipped after two days of gains, set for a weekly drop as traders worried about a global demand slowdown.

Bitcoin dropped sharply and hit a three-week low of $21,404.

Next week, investors will be paying close attention to minutes from the European Central Banks' July meeting, as well as comments by U.S. Federal Reserve Chair Jerome Powell when he addresses the annual global central banking conference in Jackson Hole on Aug. 26.

China is widely expected to lower its benchmark lending rates on Monday, a Reuters survey showed, with a vast majority of participants predicting a deeper cut to the mortgage reference to lift the ailing property sector.