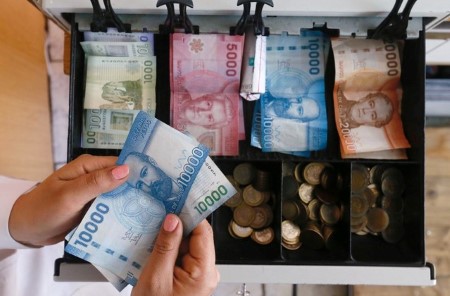 * Mexico's peso set for sharpest weekly decline over a month

Aug 19 (Reuters) - The Chilean peso fell nearly 2% on Friday, leading declines among Latin American currencies and putting it on track for its worst week in almost 14 years, as doubts about demand for copper, Chile's most important export, unnerved investors.

With top metals consumer China struggling with an economic slowdown as it battles resurgent coronavirus infections, copper prices have been volatile.

Chile, the world's biggest copper producer, saw its currency slide more than 7% this week, on course for its worst weekly performance since October 2008.

Data on Thursday showed that Chile's economy grew 5.4% in the second quarter, below expectations of economists in a Reuters poll.

"We anticipate quarterly declines in real GDP in the second half of the year," Credit Suisse analysts said.

Mexico's peso MXN= lost 0.3%, on track for its sharpest weekly decline in more than a month, while Brazil's real BRBY slipped 0.3%.

Lula, the front-runner in the race, aims to recreate ministries closed by Bolsonaro if he wins the election, aides said, as part of plans to bolster industrial development and state planning.

A Lula government is not likely to continue Bolsonaro's privatization agenda, though it is also not expected to return to the increased state interventionism of former President Dilma Rousseff, said Wilson Ferrarezi, an economist with TS Lombard.

"A more centrist government is the most likely outcome."

Stocks in Latin America also fell, with Brazil's Bovespa index .BVSP down 2.2% on the back of declines in mining, energy and bank shares.

Shares of Unifin has tumbled more than 80% since it flagged last week that it would miss debt repayments.

In Argentina, the tightly controlled peso ARS= was flat. Economy Minister Sergio Massa signed an agreement with the Development Bank of Latin America for six loans worth $740 million, the Economy Ministry said in a statement, as Argentina tries to reverse a severe fiscal deficit and foreign currency shortage.

Reporting by Susan Mathew and Shreyashi Sanyal in Bengaluru; Editing by Paul Simao and Tomasz Janowski