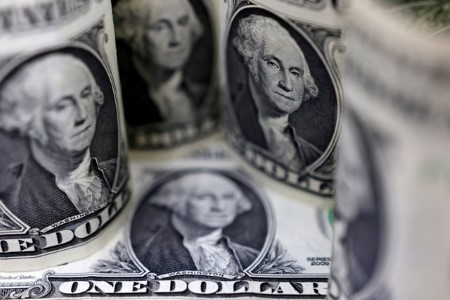 Producer prices in July in Germany - the euro zone's leading economy - leapt 37.2% from the same time last year and 5.3% from June, mainly because of rising energy costs.

German bond yields surged, with the 10-year yield DE10YT=RR hitting a four-week high, as the data was seen as reinforcing fears of "stagflation" - a combination of high inflation and low growth.

The U.S. benchmark 10-year Treasury yield US10YT=RR , an important barometer for mortgage rates and other financial instruments, rose about 10 basis points from its close on Thursday to a month high of 2.988%. It hit an intraday high of about 2.998%, just shy of the 3% threshold it crossed in May for the first time since 2018 as investors worried about the U.S. Federal Reserve's plan to tighten monetary conditions.

The rising pressure in yields offset a rally on Thursday, which was partly due to investors getting some relief from the minutes of the Fed's July 26-27 policy meeting. The minutes, which were released on Wednesday, were seen by many as confirming a less aggressive stance in the U.S. central bank's fight against inflation.

A string of Fed officials on Thursday said the central bank needs to keep raising borrowing costs to bring high inflation under control, even as they debated how fast and how high to lift them.

The comments, however, were no smoking gun for Treasury yields, with investors now likely to be looking for direction from Fed Chair Jerome Powell when he addresses the annual global central banking conference in Jackson Hole, Wyoming, on Aug. 26.

The Fed has raised its benchmark overnight interest rate by 225 basis points since March and is expected to raise its policy rate by another 50 or 75 basis points at its next meeting on Sept. 20-21 as it seeks to counter four decade-high inflation.

The rapid tightening of financial conditions, however, has led investors to weigh inflation concerns against recessionary fears, with markets fluctuating between the two.

Richmond Federal Reserve President Thomas Barkin said on Friday the Fed's efforts to control inflation could lead to a recession, but that it needn't be a "calamitous" decline in economic activity.

An inversion in this part of the yield curve is viewed as a reliable indicator that a recession will follow in 12 to 18 months.