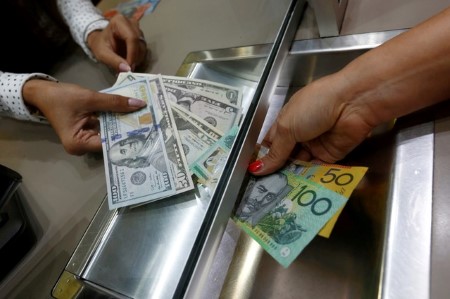 Against the yuan CNY=CFXS , the dollar went high as 6.7950 at one point, a level last seen in mid-May.

The Australian dollar AUD=D3 sank as low as $0.70005, threatening to drop below the psychological 70-cent mark for the first time since Wednesday.

Investors' latest move to the safety of the dollar came after a raft of weak global economic indicators. Overnight data showed U.S. single-family homebuilders' confidence and New York state factory activity fell in August to their lowest levels since near the start of the COVID-19 pandemic.

"The weakness in the U.S. and Chinese economies is typically a bad sign for commodity currencies," Commonwealth Bank of Australia strategist Joseph Capurso wrote in a note to clients.

"The path of least resistance for NZD is lower."

The Reserve Bank of New Zealand is widely expected to raise rates by half a point again on Wednesday, with the focus on whether policymakers follow the Federal Reserve and Reserve Bank of Australia in shifting to a more data-driven approach.

The dollar index had retreated as low as 104.63 last week for the first time since the end of June, after sliding from a two-decade high at 109.29 in mid-July, as markets pared bets for continued aggressive Fed tightening amid signs of a cooling in the economy and inflation.

However in recent days, several Fed policymakers have spoken of the need for continued rate hikes.

"Fed officials have no choice but to sound tough in the face of a very, very tight labour market and far too-high inflation," Kit Juckes, the head of FX strategy at Societe Generale, wrote in a research note.

"It's hard to build a compelling case to sell the dollar in that world."