Asia stocks in limbo as dollar takes the lead 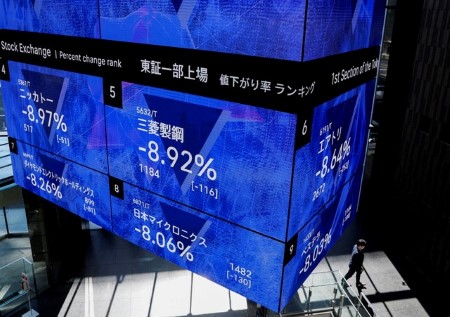 * Yuan hits lowest since May as China economy teeters

SYDNEY, Aug 19 (Reuters) - Asian shares were left in limbo on Friday while the U.S. dollar made all the running as recession clouds gathered over Europe and highlighted the relative outperformance of the U.S. economy.

Added concerns about the health of China's economy saw MSCI's broadest index of Asia-Pacific shares outside Japan .MIAPJ0000PUS ease 0.1%, to be down 1% on the week, and had the yuan CNY=CFXS on course for its worst week since May.

The yuan fell past the psychological 6.8-per-dollar mark and was within a whisker of striking a two-year trough.

S&P 500 futures ESc1 eased 0.2% and were little changed on the week having repeatedly failed to clear the 200-day moving average, while Nasdaq futures NQc1 slipped 0.2%.

The threat of higher borrowing costs hung over markets as no less than four U.S. Federal Reserve officials signalled there was more work to do on interest rates, with the only difference being on how fast and high to go.

Markets 0#FF: are leaning toward a half-point hike in September, but see a growing risk of a 75-basis-point (bp) hike - currently a 2/5 chance. Rates are seen peaking at least at 3.5%, though some Fed members are arguing for 4% or more. FEDWATCH "There are no signs that the labour market or inflation data are slowing sufficiently for the Fed to declare victory on inflation," said Brian Martin, head of G3 economics at ANZ.

"We see upside risks to the Fed's inflation projections, and we expect these and the dot plot to be revised up in September," he added. "We have revised up our year-end fed funds rate forecast by 25bp to 4.0% and now expect three 50bp hikes over the remainder of 2022."

All of which underlines the importance of Fed Chair Jerome Powell's Aug. 26 speech at Jackson Hole, usually a seminal event on the central bank calendar.

The bond market is clearly on the hawkish side with two-year yields US2YT=RR 33 basis points below the 10-year yield US10YT=RR and flashing recession warnings.

The "R" alarm is also ringing in Europe and Asia. Chinese economic indicators have been dismal this week, with only the hope of regulatory reprieve and government assistance keeping a bid under technology and property shares.

After half a year of war in Europe's east, natural gas prices TRNLTTFMc1 hit a record closing high on Thursday, adding to an inflation pulse that is sure to drive more painful policy tightening, exacerbating the risk of recession.

Sterling was another casualty, losing 1.8% for the week to $1.1917 GBP= . Investors fear inflation in Britain at a stratospheric 10.1% will lead the Bank of England (BoE) to keep hiking and actually force a recession.

The cost-of-living crisis saw British consumer sentiment plunge to its lowest on record in August, showed a monthly survey from data provider Gfk.

"Strength in the wage and price data have raised the bar for inaction and we now think the BoE will need to see clearer signs of a hard landing in order to pause," said analysts at JPMorgan who raised their rate forecasts by 75 basis points to 3%.

"We look for a two quarter recession starting in 4Q that results in a cumulative 0.8% drop in GDP."

Oil prices were a little steadier on Friday, but still down on the week with Brent having touched its lowest since February at one point on concerns about demand.